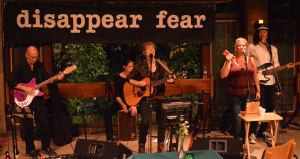 SONiA (Rutstein, aka disappear fear) writes and performs captivating love songs and confronts the hypocrisies and biases of our culture with a positive message of openness and optimism.  Having performed in Israel/Palestine and in many parts of the world, SONiA’s Judaic roots live in the colors of her songs and paintings.  SONiA has performed in 16 countries and has just as many award winning albums to her credit. She has received the GLAMA Award for Female Artist of the Year, Out Music Award for OUTstanding World Music CD, and was a finalist in the Telluride Song Competition. Her talent as a guitar player led the Santa Cruz Guitar Company to create a SONiA Model which has been sold in the US, Germany and Australia. Singing in Hebrew, Spanish, Arabic and English, her powerful honesty touches people of varied social and ethnic backgrounds. SONiA’s independent record label, disappear records, donates 18% of every download to the United Nations World Food  Programme. www.soniadisappearfear.com