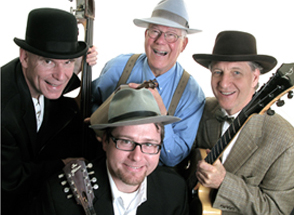 You haven’t heard “Pinball Wizard” or “People Are Strange” until you’ve heard it played on jugs and “various other sundries.” Jug band music is blues, ragtime, swing and jazz combined in a strange concoction spawned in Loiusville, home of the Juggernaut Jug Band. Jug bands flourished in towns along the Ohio and Mississippi Rivers in the 1920s and 1930s. Today, as then, a jug band is the ultimate party band. The Juggernauts have been featured on the Today Show and radio’s “Dr. Demento Show.” Their current CD isYou Mean We Get Paid For This