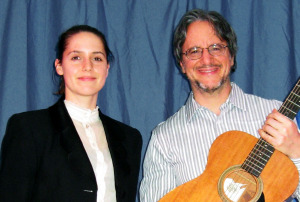 Andrew Calhoun writes with a paradoxical combination of incandescent intellect and unstudied magic. He is both a lightning rod for

“the unconscious rightness of intuitive connection” and a perpetual student of songcraft with a deep respect for both tradition and innovation. In the thirty-odd years that he has been writing and performing he has created an impressive body of work. Onstage he is disarmingly unpretentious, spontaneous and darkly witty, weaving a tapestry that includes not only his own songs but Scottish ballads that he’s translated from dialect and poems and songs by exceptional writers such as Dave Carter, Mary Oliver and Robert Frost. At age seven Andrew memorized W. B. Yeats’ “Song of Wandering Aengus,” thus earning a nickel from his mother. He got his first guitar at age ten and began writing songs at twelve. By the late seventies he was a fixture in the Chicago folk scene. He presents workshops on many topics: Creative Songwriting, Song Appreciation, Scottish Folk Ballads, and Music Theory for Guitarists.  In 1992 Calhoun founded Waterbug Records, an artists’ cooperative folk label which has grown to 70 titles, bringing some of the brightest singer-songwriters and folk musicians to an international audience. Waterbug was the first to distribute music by Chuck Brodsky, Cosy Sheridan, Dar Williams, Lui Collins, Sons of the Never Wrong, Erin McKeown and many others.  His own recordings have been released on Hogeye, Flying Fish and Waterbug Records.

“Andrew Calhoun tells the truth. To my knowledge, there is no better songwriter alive.”   – Dave Carter