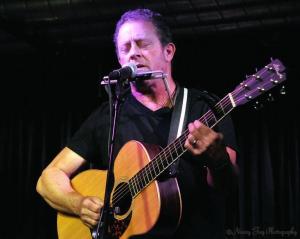 In his own words: I’ve been playing music since I was 12. The first album I bought myself was Neil Young’s Harvest. I still think it is the greatest single album ever produced. I learned to play blues by listening to Lightnin’ Hopkins and Sonny Terry and Brownie McGee. I learned to write lyrics by reading Jack London, William Carlos Williams and Frank Herbert. By the time I was 25 I had worked as many jobs as a gypsy laborer. I never paid attention in school. I went to college for a year and made a real mess of it. During the 80’s I played acoustic music all over the country and in Canada with my partner, Susan Shore. We had a wonderful band, dubbed the Honky Tonk Dogs. We put out two albums, one on Flying Fish records and one on an independent label call ROM Records. I come by this naturally, by blood. My father writes poems about everything and takes the Marxist approach to art: that if you aren’t saying something about something then you are saying nothing about everything. He might disagree, but I know this is true. He writes love poems that look like something else. I, too, can only write about love by surprise or accident. I’ve been writing songs again. I record them in one day, play all the parts, mix them and move on. Like my first influence, Neil Young, I’m always working on something new. I’m musically restless. I love the work. I look angry but I’m deeply happy. I’m grateful. www.nathanbellmusic.com