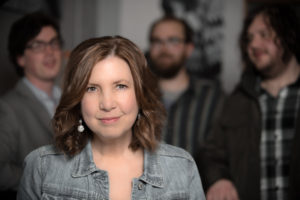 With a smokey and seductive alto, seven-time IBMA Bass Player of the Year Missy Raines heads up this all-acoustic ensemble. The territory The New Hip covers is broad and the compass is set by Raines, planted right in the center of the stage, directing with her bass every bit as much as she’s playing it. Raines’ bluegrass roots are deep and long-reaching with touring and recording stints with first generation legends such as Eddie Adcock, Mac Wiseman, Jesse McReynolds, Josh Graves and Kenny Baker. A former member of the Claire Lynch Band, The Brother Boys, and one half of the acoustic super duo Jim Hurst and Missy Raines, Missy is one of the most respected and popular figures within the bluegrass community.

“The New Hip, along with bands such as the Avetts and Churchill, add their brilliance to the swiftly growing collection of Newgrass artists that have brought southern music to the mainstream.
– Deep South Magazine