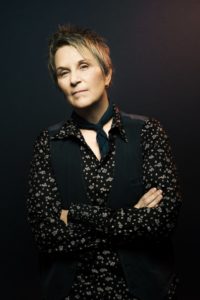 Two more successful restaurants, an escalating addiction, and a subsequent arrest led her into sobriety. It was rehearsal for what was to follow, when she wrote her first song in her mid-thirties. From that point, Gauthier channeled a long line of eloquent works, including the achingly beautiful, “Mercy Now.” She says of her new CD, Trouble and Love, “I started the process in a lot of grief. I’d lost a lot. So the first batch of songs was just too sad. It was like walking too close to the fire. I had to back off from it. The truth is that when you’re in the amount of grief I was in, it’s an altered state. Life is not that. You go through that. We human beings have this built-in healing mechanism that’s always pushing us toward life. I didn’t want to write just darkness, because that’s not the truth. I had to write through the darkness to get to the truth. Writing helped me back onto my feet again. This record is about getting to a new normal. It’s a transformation record.”

Mary will be performing as a duo with Jaimee Harris — www.jaimeeharris.com