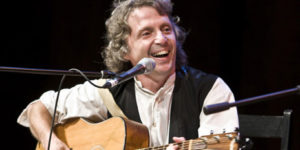 Based in Guelph, Ontario, James Gordon is one of Canada’s most prolific songwriters, well known for his songs about social justice, heritage and environmental issues. His classic “Frobisher Bay” has been recorded and performed by hundreds of acts world-wide and was an audition piece for “Canadian Idol.”  His song, “Mining For Gold” was featured on the Cowboy Junkies’ landmark album “The Trinity Sessions” and was heard in John Sayles’ film “Silver City.”
James has made countless appearances on television and radio, and was a resident songwriter on CBC radio for 12 years.  He tours as a solo performer and with his sons, and has released over 30 albums as a solo artist or with the legendary folk trio “Tamarack.”  Between tours, James is a record producer, playwright, community activist and theatre director.
www.jamesgordon.ca