Harper and Midwest Kind in concert 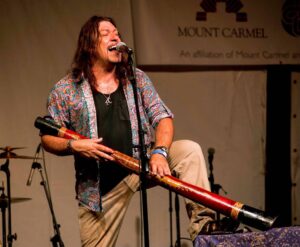 Peter Harper was born in the United Kingdom and raised in Western Australia.In Perth, one of the most isolated cities in the world, there was a thriving blues and folk scene. The blues had a rawness, an honesty and a passion of the soul which affected Harper deeply. Then, like every blues lover, Harper began his journey backwards to discover the deeper roots of the music: the works of artists such as Muddy Waters and Sonny Boy Williamson II.  Harper did not stop his search with the blues. It was a chance meeting with Hopi “Dan Running Bear” in  Colorado that led him down the path to rediscovering the music of his homeland. Fascinated with the spirituality and culture of the American Natives, he found similar qualities in the Australian Aborigines of his homeland. On adding the native didgeridoo to his music, Harper says, “The didgeridoo is a spiritual and healing instrument, and it seems blues music accepts it with open arms. Prior to his introduction to American audiences, Harper released six CDs in Australia. Harper received a Gold Record for “Sailing Australia” (America’s Cup Theme). Harper had the honor of backing blues legend, Muddy Waters on harmonica for his West Australian tour. He was also invited to perform harmonica on stage several times with US super group, Journey.

With a home at a U.S. record label and a growing following from American audiences, Harper made the permanent move to the U.S. His high-energy shows are performed at club venues, blues festivals, and world music festivals, with an average of 25 festivals and 200 club dates per year.  www.harper.biz