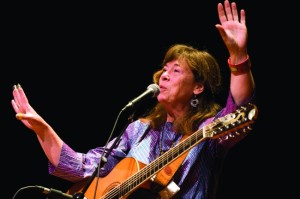 Michigan native Claudia Schmidt has covered a lot of musical ground, beginning with a stirring rendition of “Tammy,” at age 4, around a neighborhood bonfire. Claudia’s 3-decade career touring North America and Europe includes regular stints on “A Prairie Home Companion;” participating in the delightful Les Blank movie, “Gap-Toothed Women,” contributing a song as well as an interview; and performing a lead role in The Gales of November,” a musical retelling of the Edmund Fitzgerald tragedy from the point of view of three wives of the doomed crew of the Great Lakes ore-carrier. Claudia has recorded fourteen albums mostly of original songs, exploring folk, blues, and jazz idioms featuring 12-string guitar and mountain dulcimer. I Thought About You is her second effort leading her own swinging sextet, Claudia Schmidt & The JumpBoys. In 2003 she released a spoken-word CD, Roads, which includes poems and essays from her rich performance repertoire. In 2006 Claudia released her first self-produced folk/acoustic CD, Spinning, with a studio full of Michigan s finest musicians. Claudia describes herself as a “creative noisemaker.” You may expect anything at a Schmidt concert: hymn, poem, bawdy verse, torch song, satire. She can weave the elements of music and stage into a program so full of life that one critic has described a Claudia Schmidt concert as “…a lot like falling in love. You never know what’s going to happen next; chances are it’s going to be wonderful; every moment is burned into your memory; and you know you’ll never be the same again.” www.claudiaschmidt.com