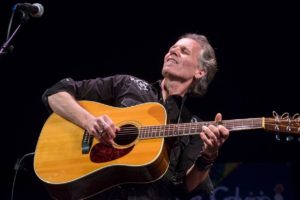 Brooks Williams was born in Statesboro, Georgia (the town made famous by the classic song Statesboro Blues) and did his apprenticeship in the small bars and coffeehouses of New York and Boston.

The result of those early years is an unflagging career that goes from strength to strength. “Lucky Star,” Williams’ 28th solo recording, is already turning heads and making itself known on playlists throughout the world.

Ranked in the “Top 100 Acoustic Guitarists,” he’s a mean finger-picker and a stunning slide guitarist. His voice earned Brooks a nomination for Best Male Vocalist by Spiral Earth, one of the UK’s most respected roots music publications.

He’s no slouch as a songwriter, and he has an impeccable ear for a good cover song. Come enjoy the return of Brooks Williams to our Series!