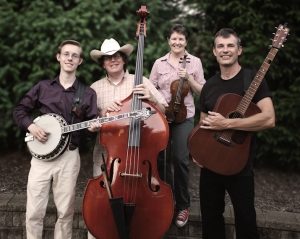 Although a Detroit native, Bill’s musical roots are in the South. His parents migrated from Black Oak, Arkansas to work in Detroit’s steel industry in the 1940s, bringing with them their love for bluegrass and country music. Bill grew up listening to artists such as Johnny Cash and Buck Owens on Detroit’s country radio station, “The Big D.”Detroit rock inspired Bill’s early musical career. But in 1999, Bill turned on the radio and heard, “Yours Forever Blue” by Steve Earle and the Del McCoury Band. From that moment on he found himself with a nonstop desire to hear and play that kind of song. Soon he was writing them, too. Bill is a first-prize winner in the Metro Detroit Songwriting Showcase, with his song‚ “Lovin’ You.”  Bill lives for the joy of entertaining his audience. A true showman! Bill’s band includes Chuck Anderson on bass, John Lang on steel guitar and Mary Seelhorst on fiddle. Sure to be a fun night!