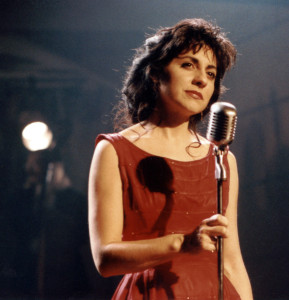 As the youngest of thirteen children born to Mexican immigrant parents, Hinojosa grew up listening to traditional Mexican songs as well as the pop and folk stations of the 60s on her parents’ radio. Inspired by these diverse influences, her career took her to New Mexico and then to Nashville. Performing with legendary country musician Michael Martin Murphy inspired her to begin writing her own songs in English and Spanish.

After her first independent release, 1987’s Taos to Tennessee, she was signed by A&M Records. Since then, a continuous stream of recordings and numerous American and European tours have brought Hinojosa’s music to an ever-expanding audience. To date, she has released 16 albums.

Her releases explore a wide variety of styles, ranging from the perfect balance of country, folk, and Latino elements on Culture Swing and the collection of Mexican love ballads and border songs on the all-Spanish Frontejas, to the delicate mysticism of Dreaming From the Labyrinth and the joyful optimism on her bilingual children’s record, Cada Niño/Every Child. Sign of Truth added yet another facet to Hinojosa’s sound, revealing a more personal, intimate, and independent side.

Her latest album is After the Fair.