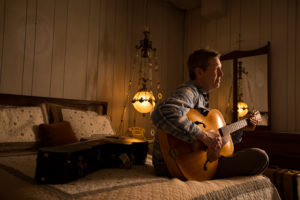 Robbie Fulks has the soul of a country singer and the mind of a vaudevillian. His cross-genre antics and clever, heartfelt writing are accompanied by his amazing guitar work in honky-tonk, country, bluegrass, power pop, or whatever style strikes his ample whimsy at the time.
Robbie learned guitar from his dad; banjo from Earl Scruggs and John Hartford records; and ﬁddle (long since laid down in disgrace) on his own. He attended Columbia College in New York City and dropped out to focus on the Greenwich Village songwriter scene and other ill-advised pursuits. Since then he has gone on to create a multifarious career in music. He was a staff instructor at Old Town School of Folk Music; he worked on Nashville’s Music Row as a staff songwriter.
Radio loves him too, with multiple appearances on WSM’s “Grand Ole Opry;” NPR’s “Fresh Air,” “Mountain Stage,” and “World Café;” and the syndicated “Acoustic Café.” TV appearances include “Austin City Limits,” “Today,” “Late Night with Conan O’Brien,” and “30 Rock.” TV/ﬁlm use of his music includes “True Blood,” “My Name Is Earl,” and “Very Bad Things,” and he has voiced or sung campaigns for Budweiser, McDonalds, Nickelodeon, and Applebees. Theatrical credits include “Woody Guthrie’s American Song” and Harry Chapin’s “Cottonpatch Gospel.” He tours yearlong with various conﬁgurations and plays a weekly residency at the Hideout in Chicago. Come join us for Robbie Fulks’ first visit to Green Wood!