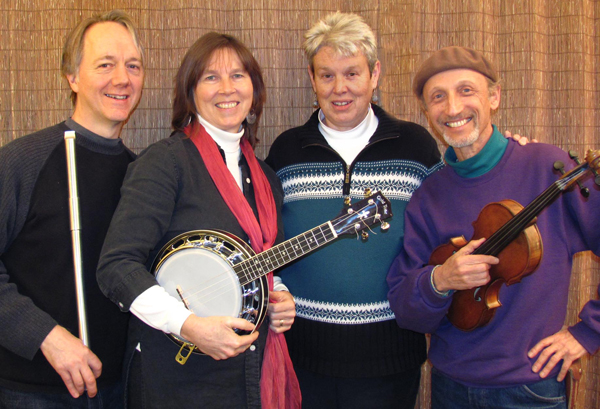 Singer/songwriter Jeanne Mackey offers a blend of emotional intensity, wry humor, and global consciousness. In addition to original tunes, her repertoire ranges from Dar Williams to Patsy Cline, from Pete Seeger to Irving Berlin. A seasoned guitarist, she draws on a variety of styles — folk, classic swing, funky blues, and more — with the occasional sprinkle of mandolin, accordion, or banjo. Mackey rocked the 1970s East Coast topical music circuit as a young musician advocating feminist values and social justice.  In 2010, Mackey created “Drop The Knife: A Memoir-in-Song,” an evening of original songs and stories exploring the meaning of homeland, curses, death, and magic.

Linda Teaman and Tom Voiles do much of their singing and playing with Nutshell, an Ann Arbor-based Celtic roots band. Nutshell plays for contra-dances and performs at festivals across North America.

Linda is a singer who brings depth of understanding, warmth and sensitivity to the music. In 2005, her graduation recital for a degree in k-12 choral music had her singing in five languages, encompassing musical forms such as Irish sean nos singing and Italian and German arias by composers Purcell, Mozart and Brahms. She leads the Rudolf Steiner Community Singers, a small choir that sings uncommon Christmas and seasonal songs of celebration.  She hopes you’ll forgive her classical background and that she is redeemed by her love of folk music.  In addition to vocals, she adds light percussion to the mix.

Tom consumes a well-rounded musical diet that ranges from Celtic to Indian to rock and roll. He enjoys mixing different styles while maintaining a respect for the traditions from which they spring. Tom has studied North Indian Classical music, Moroccan folk drumming and western classical flute. He has worked with performance artists, dancers, mimes and poets, including Hosain Mosavat, Gerry the Fool, Matthew Smith, ML Liebler and the Magic Poetry Band.

Laz Slomovits is one of the twin brothers in Ann Arbor’s nationally-known children’s music duo, Gemini. A fine singer and multi-instrumentalist, Laz is starting his 41st year playing music. His songs are featured in songbooks used by music teachers throughout the country, and Gemini’s recordings have won numerous awards. In addition, Laz has had a notable solo career. In his solo work, Laz is best known for his powerful musical settings of the poetry of ancient Sufi mystics Rumi and Hafiz, as well as that of contemporary American poets. He is currently at work on new recordings for both children and adults, as well as a musical play that will be produced by Wild Swan Theater in its upcoming season.